Phages: the tiny viruses that could help beat superbugs (The Guardian) 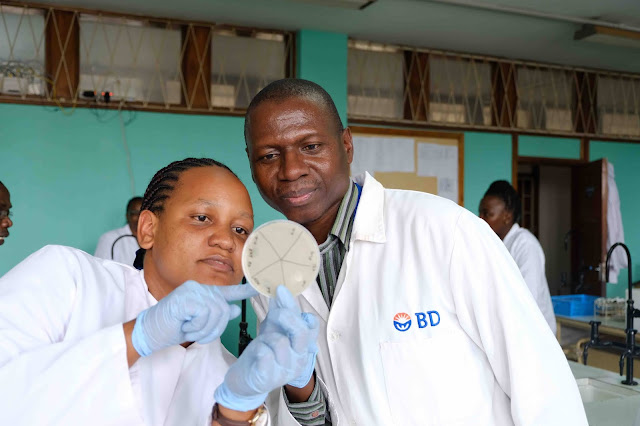 Bacteriophages were superseded by modern antibiotics, but scientists believe they could be key to conquering antimicrobial resistance.

It is, say enthusiasts, the cure that the world forgot. An old therapy that could take on the new superbugs.
Discovered in 1917 by French Canadian biologist Félix d’Hérelle, phages – or bacteriophages – are tiny viruses that are natural predators of bacteria. In many countries they were supplanted during the second world war by antibiotics but continued to be used for decades in eastern Europe.
They are now being seen by some scientists as a complement – and perhaps an alternative –to antibiotics, the overuse of which has led to increasing bacterial resistance and the advent of the superbug.
Tobi Nagel, a California-based biomedical engineer, launched Phages for Global Health (PGH) in 2014 to help developing countries fight antimicrobial resistance (AMR). She had become disillusioned with the inequality in the pharmaceutical industry, in which she worked for 15 years, and says: “We have 30 years until the worst of this crisis. Phages could be made into drugs in less than 10 years. I was becoming increasingly frustrated that the drugs I was working on in the US, which typically cost $1bn to develop, were not accessible to most people living in developing countries.”
Unlike antibiotics, phages must be used in a highly targeted way, because each phage is effective against only a limited number of bacteria. They have, says Nagel, undergone important therapeutic and commercial development.
“In the near future, phages will be secondary to antibiotics as they can still work against most pathogens. Phages will be the last option when you have no choice,” says Sivachandran Parimannan, a researcher at the Centre of Excellenceat AIMST University in Kedah, Malaysia.
According to the World Health Organization (WHO), antimicrobial resistance is a rising threat to global health, jeopardising decades of medical progress and transforming common infections into deadly ones. A UN report published last year suggested yearly deaths from drug-resistant diseases could rise from the current 700,000 to 10 million in 30 years if no action is taken.
Read the full story on The Guardian website.

Picture caption: Drs. Nyambura Moremi and Jillani Ngalla, participants of the 1st Phage Workshop in Uganda in 2017 and hosts of the 2nd and 3rd Phage Workshops in Kenya and Tanzania in 2018 and 2020 (photo credit: Prof. Martha Clokie)
Older Posts Home